In keeping with our country’s long tradition of peaceful protest at sea, the Oil Free Seas flotilla will confront Anadarko’s oil drilling ship over 100 nautical miles off the west coast of New Zealand in the coming weeks.

The flotilla will set sail in the next few days from Auckland, Wellington, Kaikoura, Bay of Islands and Bluff, and will head to the drilling site, which is 110 nautical miles west of Raglan.

Texan oil company Anadarko is due to start drilling around the middle to the end of November, using the previously untested drill ship the Nobel Bob Douglas.

The flotilla, made up of 7 boats, is a loose association of individuals and boat owners who oppose deep-sea drilling and the new legislation that takes away New Zealander’s long-standing right to peacefully protest at sea. One of the boats taking part, the Vega, also sailed against French nuclear tests in the Pacific.

“We love New Zealand, and this country is what it is because kiwis have stood up for what we believe in. I was on board the SV Vega protesting against French nuclear testing in the Pacific in the 70’s. Nuclear testing in the Pacific wasn’t right and deep-sea oil drilling in the Tasman is not right either. We will not be bullied into submission by big oil or dubious laws,” said Anna Horne of Oil Free Seas Flotilla.

Earlier this year, the Government announced a new law to ban aspects of protesting at sea. Now known as the ‘Anadarko Amendment’, it states ‘that it is illegal to interfere with any structure or ship that is in an offshore area that is to be used in mining activities, with an exclusion zone of 500 meters.’

“By being there we are saying to Anadarko that they are not welcome here doing this kind of activity. This law suits the suits, but not the environment and the wishes of the people of New Zealand” said Anna Horne.

The Oil Free Seas flotilla will depart from ports around New Zealand from Friday.

The launch events are as follows and we would like to invite all New Zealanders to grab a banner and come along.
Friday 8th at 2:00pm from Bluff (City Wharf)
Monday 11th at 12noon from both Auckland (Princess Wharf) and Kaikoura (Fisherman’s Wharf)
Tuesday 12th at 12noon from the Bay of Islands (Opua)
Thursday 14th at 10:00am from Wellington (Queens Wharf) 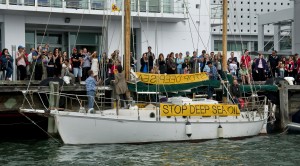 The Anadarko Amendment states: that it is illegal to interfere with any structure or ship that is in an offshore area that is to be used in mining activities, with an exclusion zone of 500 meters.

This means that no matter what, we can no longer get any closer that 500 meters and fly our banners and flags in order to protest against deep-sea oil exploration. It is also has implications for the international rules of the road that are not clear. More information about the Amendment can be found at:

The flotilla is fully aware of the law and we intend to protest peacefully and safely. But we care what happens to our marine environment and coastlines. We will raise our voices loudly against deep-sea oil exploration and the law restricting our rights to protest at sea.

With our peaceful protest at sea, we intend to oppose deep-sea oil exploration from going ahead along our precious coastlines. Remember, the petrol at the pump is not going to get any cheaper no matter how much oil they pump up out of the ocean (it will be owned and exported by foreign companies), but as a country we carry all the risk 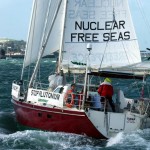